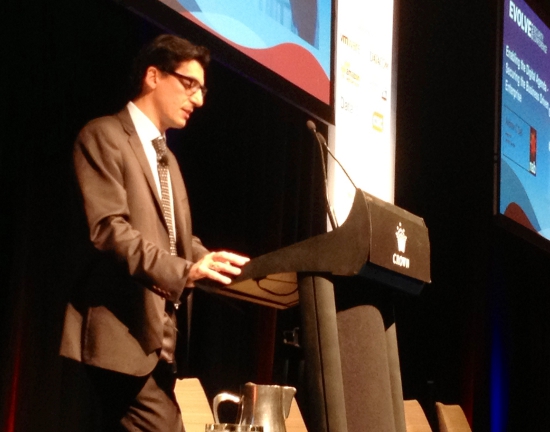 Andrew Dell, head of IT Security Services Operations within the NAB Technology division.

CSOs must inject themselves into strategic business planning conversations early on if they’re to avoid being circumvented by hasty pushes towards BYOD or new online services, the head of the National Australia Bank’s IT security planning has advised.

Speaking to the Evolve 2013 security conference in Melbourne this morning, Andrew Dell, head of IT Security Services Operations within the NAB Technology division of the banking giant, said increasingly tech-savvy banking executives were putting increased pressure on IT security personnel to keep up.

“The world is moving so fast, and the business is expecting us to do so much, that it’s possible we may be bypassed,” Dell warned. “They are increasingly tech savvy and have very high expectations of what is doable. And if we are not able to support and drive the business with the new technologies they need to deliver securely, they have options – and can go around us.”

That possibility presents an ever more significant threat for financial-services companies that have been besieged by ever smarter and more-determined cyber-criminals launching “evolutionary cyber attacks and forcing us, as an industry, to grow up and face new challenges,” he said.

Although many of the attack methods being employed today represent new spins on old hacker favourites, the threat to banks and other organisations continues to pose new threats for security executives as new variants of malware like the infamous Zeus continue to wreak havoc across the world.

“In the past we’ve had the luxury of a slow and steady game of cat and mouse with cyber criminals, but we’re seeing a definite shift in the threat posed to all industries,” Dell said. “In some ways, the threats are the same that we’ve been talking about for a long time. What is evolving is their sophistication and ubiquity. While understanding is important – and we have tools, people and partners to help with that – It is being able to identify and react to the origin that is the game changer for us.”

That shift in strategy had been born by the need to look beyond perimeter security to protect systems inside the bank’s systems, he explained: “historically we have had a very much perimeter based system. And while it’s important to maintain that perimeter, the methods they exploit once they’re in, are forcing our security strategy to refocus its attention on getting some of the security basics right as well.”

Refocusing attention has also required IT security organisations to embrace new protection methods as their threat profile expands from core transaction systems to incorporate busier Web-based systems. Such systems are often launched as a result of marketing, customer attraction or other business initiatives – and can each represent new security and corporate-governance risks unless IT security managers work proactively to engage business leaders at an early stage.

“As an IT security organisations we need to make sure we’re delivering controls in a way that meets the company’s obligations, and so we can avoid any unnecessary, reactive investment that distracts us from achieving our strategic goals,” Dell said.

This approach can be applied to areas such as BYOD, where demand from business users is forcing security professionals to avoid flat-out refusal and find a compromise security solution that’s acceptable to all parties.

“If we don’t provide a solution that’s usable and accessible, users will go around us,” Dell said. “The key thing is to know what the business is planning, so you can be present and be relevant in the discussion rather than only engaging at the outset of the design stage.”