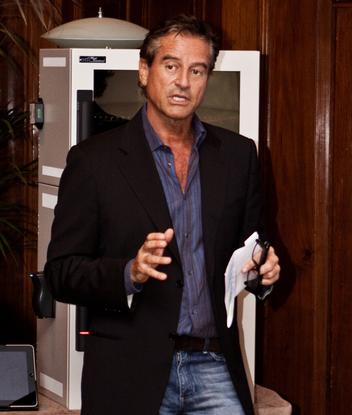 Sydney-based serial entrepreneur and star of The Apprentice Australia, Mark Bouris, has launched a suite of IP-based, data centre access control systems to local customers in a partnership with cabling supplier Anixter.

TZ Limited is the parent company of TZ Infrastructure Protection which develops network devices and software for access security inside the data centre. Bouris is executive chairman of TZ.

The technology was originally developed in Australia, but TZ is now headquartered in Chicago in the US.

Speaking at the launch Bouris said: “Physical security is just as important as data security.”

“Over the past weeks we’ve been rolling out TZ across Canada, Europe and Australia,” he said.

“The products have been available in the US for some time, but it’s important to get a footprint here.”

TZ has two main products, the TZ Praetorian and the TZ Centurion, which allow IT managers to control access to systems at the cabinet or enclosure level.

The Centurion also does environmental monitoring and can integrate into existing network management systems.

Being IP-based access to servers can be controlled with the web interface from any computer and a demonstration of unlocking a cabinet was performed with an iPad.

At the cabinet the system uses an electro-mechanical lock than can be overridden manually with a key. Both systems have audit trail capabilities and send alerts when an event is triggered.

Tim Martin, managing director for Anixter South Pacific, said there has been an explosion in data centre activity since the GFC and, according to its research, 11 per cent of IT managers remain concerned about physical security.

“We use smart devices that can act and audit,” Wilson said. “A TZ smart device has a Web-enabled microchip, mechanical locking, an integrated sensor and is compatible with 80 per cent of existing cabinets.”

TZ products are designed for securing racks and cabinets, not physical access to the data centres themselves, but Wilson said the software can be integrated with other types of access control tools, including those that use RFID and biometrics.

Wilson said the data traversing the Internet is encrypted and the software uses RADIUS authentication.