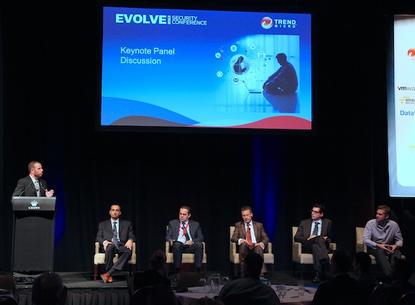 Growing demand for IT security skills may have some CSOs worried about finding enough staff, yet some security executives believe the problem isn’t only with the universities – but with ambitious IT graduates that expect senior positions without first doing the hard work to deepen their knowledge.

The rise of bring your own device (BYOD) and cloud computing – and hackers’ relentless push to find and exploit new vulnerabilities in these and other technologies – had created new vulnerabilities whose management required deep skill sets that many companies cannot readily find, Trend Micro ANZ managing director Sanjay Mehta explained during a panel session at this week’s Evolve 2013 security conference.

“Basically it comes down to budget, resources, and everything else,” he said. “One of the things organisations are wrestling with is that they don’t have teams in place that understand security attacks at this level. Even if they implement great products, they need partners to bring [skills] to that equation. And you can’t always do it right through your environment not because of the technology or the budget; actually, it’s skills.”

One big-bank CSO, however, believes that many graduates are aiming their sights too high, too early without gaining the low-level security skills that companies need. Conversations with recent IT graduates often revealed that they not only lacked depth of security skills but wanted to be placed into positions that required far greater expertise than they were bringing to the table.

“I think the universities are putting the right courses together [to train security staff],” said Andrew Dell, head of IT Security Services Operations within the NAB Technology division of the National Australia Bank. “The challenge we have as an organisation is how attractive a graduate is when they graduate with that level of skills, and what level they expect to join the organisation at.

“Certainly, at a technician level we have no trouble attracting people there,” he continued. “But the types of graduates we’re seeing coming out of universities are coming in and expecting to do a consultancy or liaison planning type role. And whilst that’s good in theory, if they don’t get that demonstrative experience and battle scars, they are less attractive than we would want.”

That presents very real problems for organisations that need skilled on-the-ground staff to manage the surge of security problems that continue to plague organisations – whether related to active security attacks or even the integrity of applications as they’re being built.

“Engineers have to be very focused on how they develop their applications up front,” pointed out JD Sherry, vice president of public sector technology and solutions with Trend Micro. “In the mid 1990s, when the Web was starting to proliferate, we weren’t necessarily engineering security into our software applications. I think that’s still prevalent today, although perhaps not at the scale that it was.”

Old technologies may have created bad habits, but new security technologies are creating other issues as vendors continue to push new point solutions into the market to counter the increasingly diversified and sneaky attacks organisations face today.

This creates new skills issues, VMware product marketing manager Aaron Steppat pointed out, because security staff may be skilled in one tool but not in the others that are equally important to the complete corporate defence. “As new problems are discovered, you often find it’s often a tool for each purpose,” he explained.

“The challenge you’ve got from now on is a ramp-up in skills to be able to use those tools. But when you’re an IT organisation and have to try to holistically address a security standpoint from not just an infrastructure perspective but also a people and process perspective, you tend to find that integration between a lot of those tools is proving to be the biggest challenge.”