Critics dump on "Jobs," the biopic of Apple's founder 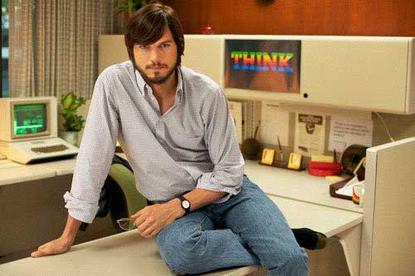 If the new biopic of Steve Jobs, called "Jobs," was an Apple product, it would endup on lots of blogposts with headlines like "Apple's Biggest Failures" or "Apple's Worst Products," judging from the first round of reviews compiled by the movie review site Rotten Tomatoes.

The movie officially opens Friday, August 16. As of Thursday afternoon August 15, just 31% of the website's approved critics, who had advanced screenings, gave the movie a favorable review, and even those seem to end up damning it with faint praise. Members at Internet Movie Database were somewhat more generous: "Jobs" scored a 5.6 out of 10 (the highest) rating from just over 2,900 IMDB users.

Overall a common thread running through the unfavorable is the movie's inability to give more insight about what made the late Apple founder actually tick, relying instead on an already widely known cultural narrative about the man, and his company.

A second film about Jobs in the works: written by Aaron Sorkin, based on Walter Isaacson's bestselling biography of Jobs.

Ashton Kutcher stars as Steve Jobs. The movie is directed by Joshua Michael Stern, whose previous directing gig (his second) was 2008's "Swing Vote," starring KevinCostner. The script is the first by Matt Whiteley. According to critic Kirk Honeycutt,Whitely was working as the corporate communications director for Dallas entrepreneur Mark Hulme, who decided to create a film company and had Whitely write the script based on public records and his own interviews.

Kutcher "sounds, looks and even walks exactly like his man," says Honeycutt. "It's an uncanny and fine performance...." (Honeycutt says he actually met Jobs years ago when the Apple founder sat down with the publisher and some reporters at "Hollywood Reporter," where Honeycutt then worked.)

But the assessment by Michael Phillips, at The Chicago Tribune, is more typical. "...Kutcher is everything except interesting," he complains. "And the script by Matt Whiteley,done no favors by Joshua Michael Stern's plodding direction, offers sketchy insight into the man whose accomplishments are treated by "Jobs" as somewhere north of the  invention of the wheel and somewhere south, barely, of the birth of human consciousness."

Kerry Lengel, at The Arizona Republic, also thinks Kutcher's performance is "uncanny." Until the actor actually talks. "Yet the deeper problem with the film is that it doesn't really add anything to the established narrative on its subject," Lengel says. That narrative is the fruit of documentaries such as "Triumph of the Nerds" and "Pirates of Silicon Valley." Obituaries and tributes after Jobs' death in 2011 detailed "his monomaniacal freakouts."

"Stern and screenwriter Matt Whiteley go out of their way to underline the latter aspect of Jobs' personality, showing him cheating his friends, publicly berating his employees and disowning his daughter before she's even born," Lengel writes. "But in trying to render his life story in all its complexity, the film fails to find a particular point of view. In short, it's no Social Network' [the award-winning film by David Fincher on the founding of Facebook]."

"'Jobs' works much better as a history of Apple than it does as a portrait of the genius who dreamed it up, says Miami Herald critic Rene Rodgriguez. It's "surprisingly thorough" and "surprisingly compelling" at showing Apple as a business in its rise and fall (the movie ends with the ousted Jobs invited back to rescue the floundering company, and his firing the board of directors.

"But Jobs' fares far less well at getting under the man's skin," Rodriguez says. "Andbecause the film has so much ground to cover, there are huge gaps in the narrative that beg for a little more detail (such as Jobs' relationship with his daughter, who he refused to acknowledge for many years and then suddenly appears to be living with him, no explanation given)."

"Though Kutcher does throw himself into the role with all he's got, trying to captureJobs' distinctive walk and mercurial temperament, his performance comes off as an assemblage of mannerisms with no deeper feeling or understanding," says Mark Olsen, of the Los Angeles Times.

Even one of the movie's few fans, Entertainment Weekly's Owen Gleiberman, only givesit a "B" grade.

"The ironic thrust of the movie is that Jobs' humanity is there in that perfectionistic insanity," he writes. "He pushes and pushes to make home computers more and more appealing, accessible, and user-friendly, and that's his great gift to the world....Getting ousted [from Apple] must have been devastating, but Jobs' doesn't really take us on that personal journey with him. The movie's fall-and-redemption narrative is generic, abstract. And maybe that's because the reason that this movie even exists -- the notion that Steve Jobs is The One Who Changed Our Lives -- has been, to put it mildly, a littleoverhyped."