Getting chipped: Why I will live with an NFC chip implant for a year

What will happen if you get an NFC chip implant? IDG Netherlands News Editor René Schoemaker is testing just that. 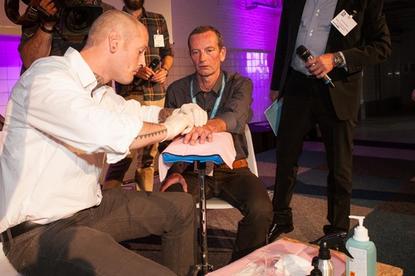 There are days when even your wife thinks you're crazy. In my case one those days was when I told her I decided to implant a near-field communication chip in my hand.

"You of all people? And that thing will stay in your arm for a year?" she asked incredulously. She had a point, of course, because I'm the one who always says that any possible breach of my own -- and my reader's -- privacy should be contested with all possible measures.

While that may be the case, I've been living with an NFC chip in my left hand since Sept. 25. It was implanted between my thumb and index finger, and I can tell you that it hurt quite a bit. But that was mainly because of all the TV camera people trying to film it, which dragged the process out from the normal five seconds to about 30 seconds.

Check out a video of IDG Netherlands News Editor René Schoemaker having an NFC chip implanted in his hand.

I got chipped together with nine other volunteers during the IT Innovation Day organized by IDG Netherlands. The other volunteers and I will spend the next 12 months testing the use of an NFC chip in our daily lives to see whether having the chip implanted in our bodies is more useful than using a chip embedded on a card or in a smartphone.

So far, it has been pretty useless though. We are still in the process of coming up with possible applications such as using the chip to pay for public transportation or in shops and restaurants.

I'm most interested in the possible negative consequences of being chipped, though. What kind of privacy and security breaches would I expose myself to, for instance?

I have already had contact with a well-known global IT-security firm about a program that can install malware on smartphones by using the chip in my hand. If you can get spyware on a phone, you can easily snoop on people, for example, your spouse or your boss. But perhaps we will try to get our hands on our secretary of Justice and Homeland Security to show how easy it is to breach security.

The chip is a showcase to make people think more about security when it comes to new technology.

The chip we are using is the xNTi, an NFC type 2 NTAG216, which is about the size of a grain of rice and is manufactured by the Dutch semiconductor company NXP, maker of the NFC chip for the new iPhone. It is a glass transponder with an operating frequency of 13.56MHz, developed for mass-market applications such as retail, gaming and consumer electronics.

The chip can be bought online and in some stores, and can be used in pendants, phones or things like debit, public transportation and security cards. In my case, the sterile chip was encased in a biocompatible glass casing, which was preloaded into an injector.

It can be used for RFID (radio-frequency identification) and NFC, which is basically an improved version of RFID. NFC differs from an RFID tag because it can send and receive, while an RFID tag can only send. This makes NFC ideal for intelligent solutions like payments.

The chip's storage capacity is pretty limited, the UID (unique identifier) is 7 bytes, while the read/write memory is 888 bytes. It can be secured with a 32-bit password and can be overwritten about 100,000 times, by which point the memory will be quite worn. Data transmission takes place at a baud rate of 106 kbit/s and the chip is readable up to 10 centimeters, though it is possible to boost that distance.

The plan is to test the chip's abilities for the next year. I will do that with Ruben Horbach, the founder of WizKid, an Internet of Things startup, who also still finds time to finish his Communication & Multimedia Design study.

I will also get help from Permanent Beta, a foundation that aims to bring people together to share knowledge about technology, science and art. The foundation will host live events where experiments will be demoed and where possible applications will be considered.

One of them is currently being build by our IT department at IDG Netherlands. They are working to let me gain access to our building with the chip in my hand and also are installing a reader on my PC so that the chip will serve as a password replacement when I log on.

But as far as I'm concerned, the project won't stop there. And therefore I need you, my readers, to tell me what you think would be a good use of the NFC chip.

So, last but not least, I'm looking for input from you. Tell me in the comments or in an email to rschoemaker@idg.nl what you think I should do. Maybe we can devise a way to hack the chip? Or maybe we could come up with a way -- highly hypothetical, of course -- to allow me to use Dutch public transport free for the rest of my life? Feel free to go nuts.

I won't promise you that I will do a certain test if I don't feel comfortable about it. But then again, I can't imagine what that would be!

(René Schoemaker will report on his NFC experiences on a regular basis in the coming year.)