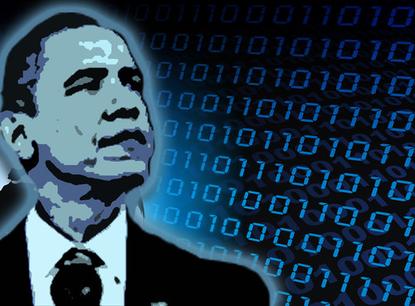 Blowing up entrenched business models and picking up the profits that spill onto the floor is a time-honored tradition in tech, these days known by the cliche of the moment, "disruption." This year everyone was trying to push back against those upstarts, whether by buying them like Facebook did, reorganizing to compete with them like HP and Microsoft have done, or just plain going out against them guns blazing, as it seemed that every city and taxi company did with Uber. European courts fought the disruptive effect Google search has had on our very sense of the historical record. But meanwhile, legions of net neutrality supporters in the US spoke up to save the Internet's core value of disruption against the oligopoly of a handful of communications carriers. Here are our picks for the top stories of a very, well, disruptive year.

Nadella aims Microsoft toward relevancy in a post-PC world

Taking over from Steve Ballmer in February, CEO Satya Nadella faced several uncomfortable truths, among them: Windows powers only 15 percent of all computing devices worldwide, including smartphones, tablets and PCs, meaning Microsoft is no longer at the center of most people's computing experience. Nadella says he wants Microsoft to be the productivity and platform company for a "mobile first, Cloud first world." Under Nadella, Microsoft has launched Office for the iPad, embraced open source software for its Azure Cloud and launched the beta for Windows 10, which promises to smooth out Windows 8's confusing, hybrid user interface. Shortly after closing the Nokia acquisition he inherited, Nadella announced 18,000 job cuts, 14 percent of its global staff. The bulk of those cuts are in Nokia, which has been relegated to the "other" market share category in smartphones. Microsoft's sales looked good last quarter, jumping 25 percent year-over-year to $23.2 billion, though profit was hurt by the Nokia buy. Nadella claimed the company is "innovating faster," which had better be true if he is to succeed.

HP says breaking up is hard, but necessary

Agility appears to be more important than size these days. In an about-face from the direction CEO Meg Whitman set three years ago, Hewlett-Packard announced in October that it will split up, divorcing its PC and printer operations from its enterprise business. When Whitman took the reins from former HP chief Leo Apotheker in 2011, she renounced his idea to split up the venerable Silicon Valley company, saying PCs were key to long-term relationships with customers. But shedding assets is becoming a common strategy for aging tech giants. IBM has focused on enterprise technology and services after selling first its PC operations years ago, and then its server business this year, to Lenovo, and agreeing in October to pay GlobalFoundries $1.5 billion to take over money-losing chip facilities. Symantec announced this year that it would spin off its software storage business, the bulk of which it acquired 10 years ago from Veritas Software for $13.5 billion. The big question for HP is whether it can avoid alienating users and distracting its hundreds of thousands of employees.

Legal challenges and executives behaving badly marked the ascendancy of Uber this year as much as its explosive growth and sky-high valuation. The startup's hard-driving, take-no-prisoners culture has made it an unlikely poster child for the innocuous -- and perhaps misleadingly labeled -- "sharing" economy. Announcing the company's latest billion-dollar cash injection in December, CEO Travis Kalanick bragged that Uber had launched operations in 190 cities and 29 countries this year. The service is now valued at $40 billion. But the company's army of private drivers face legal challenges, inquiries and preliminary injunctions against operating, from Germany and the UK to various US states. Executives have made matters worse by threatening to dig up dirt on critical journalists and bragging about a tool called "god view" that lets employees access rider logs without permission. Rival app-based ride services like Lyft and Sidecar, whose operations are also the target of inquiries, are distancing themselves from Uber. Added to all this, there are complaints about the legality of other sorts of so-called sharing services, like apartment-rental site Airbnb, which has spawned not just opportunities for regular folks with an extra room and a hospitable nature, but created a class of real-estate investors who are de facto hoteliers. All this suggests that Web-based companies seeking a "share" of profits using middleman tech platforms to disrupt highly regulated businesses like taxis and lodging have some real battles against entrenched interests still to fight.

Established companies are snapping up upstarts at a pace not seen since the dot-com boom days, but in February Facebook's plan to buy WhatsApp for $16 billion had jaws dropping at the price tag. WhatsApp has hit about a half billion users with its mobile messaging alternative to old-school carriers. Facebook already had a chat feature, as well as a stand-alone mobile app called Messenger. But people don't use them for quick back and forth conversations, as CEO Mark Zuckerberg has acknowledged. At the Mobile World Congress in Barcelona, he confessed that he could not prove in charts and figures that WhatsApp is worth the money he spent, but said that not many companies in the world have a chance at cracking the billion-user mark, and that in itself is incredibly valuable.

Last year, Bitcoin seemed poised to disrupt conventional currencies. But this year the high-flying cryptocurrency hit some turbulence. The largest Bitcoin exchange in the world, Tokyo-based Mt Gox, fell to earth amid tears and lawsuits after an apparent hack cost the company about 750,000 bitcoins worth about $474 million. The company said a flaw in the Bitcoin software allowed an unknown party to steal the digital currency. A few weeks later Flexcoin, a smaller site, closed after it got hacked. The closures sent tremors of fear through the fledgling Bitcoin market. The leaders of Coinbase, Kraken, Bitstamp, BTC China, Blockchain and Circle all signed a statement lambasting Mt Gox for its "failings." But the incidents took the luster off Bitcoin. Still, New York's proposed Bitcoin regulations may establish a legal framework, and confidence, to help exchanges grow in one of the world's biggest financial centers. Bitcoin concepts may also spur spinoff technology. A company called Blockstream is pursuing ideas to use Bitcoin's so-called blockchain, a distributed, public ledger, as the basis for a platform for all sorts of transactional applications.

Apple's ascendance to the world's most valuable company came on top of market-defining products like the iPod, iTunes, the iPhone and the iPad. This year, it was not the iPhone 6 or the as-yet unreleased Apple Watch that came close to redefining a product category -- it was Apple Pay. Apple Pay requires an NFC-enabled Apple device, which means an iPhone 6 or 6 Plus, but by early next year, Apple Watch as well. Businesses need NFC-equipped payment terminals. With Apply Pay, you can make a credit or debit card payment simply by tapping your iPhone to the NFC chip reader embedded in a payment terminal. As you tap, you put your finger on the iPhone 6's biometric fingerprint reader. Apple was careful to line up partners: while Google stumbled trying to get support for its Wallet, more than 500 banks and all major credit card companies are working with Apple Pay. The potential security benefits top it off: When you enter your credit or debit card number, Apple replaces it with a unique token that it stores encrypted. Your information is never stored on your device or in the Cloud.

In their first day of trading on the New York Stock Exchange in September, Alibaba shares opened at $92.70, 35 percent over the $68 initial public offering price, raking in $21.8 billion and making it the biggest tech IPO ever. Alibaba is an e-commerce behemoth in China, now looking to expand globally. But don't expect a direct challenge to Amazon right away. Its strategy for international dominance depends not only on broad e-commerce, but also on carving out different niche marketplaces. Shares three months after its opening are going for about $10 more, suggesting that shareholders have faith in that strategy. The IPO also marked the ascendancy of Chinese brands. After scooping up IBM's PC business years ago, and this year spending $2.3 billion for IBM's server business as well as $2.9 billion for Motorola, Lenovo is the world's number one PC company and number three smartphone company. Meanwhile Xiaomi, the "Apple of China," has become the world's number-four smartphone vendor.

Regin and the continuing saga of the surveillance state

Symantec's shocking report on the Regin malware in November opened the latest chapter in the annals of international espionage. Since at least 2008, Regin has targeted mainly GSM cellular networks to spy on governments, infrastructure operators, research institutions, corporations, and private individuals. It can steal passwords, log keystrokes and read, write, move and copy files. The sophistication of the malware suggests that, like the Stuxnet worm discovered in 2010, it was developed by one or several nation-states, quite possibly the U.S. It has spread to at least 10 countries, mainly Russia and Saudi Arabia, as well as Mexico, Ireland, India, Afghanistan, Iran, Belgium, Austria and Pakistan. If Regin really is at least six years old, it means that sophisticated surveillance tools are able to avoid detection by security products for years, a chilling thought for anyone trying to protect his data.

The EU's Court of Justice's so-called right to be forgotten ruling in May means that Google and other search engine companies face the mountainous task of investigating and potentially deleting links to outdated or incorrect information about a person if a complaint is made. The ruling came in response to a complaint lodged by Spanish national insisting that Google delete links to a 1998 newspaper article that contained an announcement for a real-estate auction related to the recovery of social security debts owed by him. The complaint noted the issue had been resolved. But while EU data-privacy officials cheer, free-speech advocates say the ruling's language means that people can use it to whitewash their history, deleting even factually correct stories from search results. As of mid-November, Google had reviewed about 170,000 requests to delist search results that covered over 580,000 links. The headaches are just starting: Now the EU says the delinking must be applied to all international domains, not just sites within the region.

In January, a U.S. appeals court struck down the FCC's 2011 regulations requiring Internet providers to treat all traffic equally. The court said the FCC did not have the authority to enact the rules, challenged in a lawsuit brought by Verizon. The ruling reignited the net neutrality debate, with FCC Chairman Tom Wheeler proposing new rules in April. President Obama in November made his strongest statement on net neutrality to date, urging the FCC to reclassify broadband as a regulated utility, imposing telephone-style regulations. Obama's move, which critics say is an unprecedented intrusion on an independent government agency, puts political pressure on Wheeler, who reportedly favors a less regulatory approach. The proposal from Wheeler earlier this year stopped short of reclassification, and allowed broadband providers to engage in "commercially reasonable" traffic management. Public comments on Wheeler's proposal had hit nearly 4 million by September. The ball is now back in Wheeler's court, as he negotiates a resolution to the whole affair with his fellow commissioners.