The Upload: Your tech news briefing for Tuesday, January 6

What you need to know today in the world of tech 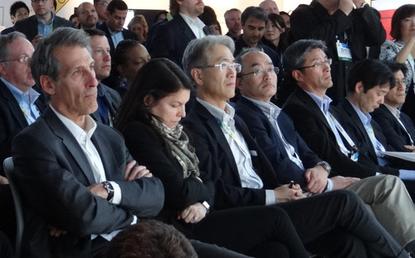 Michael Lynton (far left), president of Sony Pictures, watches Sony CEO Kaz Hirai speak about the hack of Sony Pictures during an event at CES 2015 in Las Vegas on January 5, 2015

The tech industry's center of gravity is still at CES in Las Vegas, where the annual consumer electronics extravaganza officially opens its doors Tuesday.

Samsung Electronics CEO BK Yoon may not have dazzled the crowd at his opening keynote at CES, but he emphasized the central role that the Internet of Things will play in his company's future: "By 2017, 90 percent of all Samsung products will be IoT devices. Five years from now, every single piece of Samsung hardware will be an IoT device." At CES, Samsung also said it would use its Tizen OS in its smart TVs; it launched some low-key but practical home appliances, and it jumped into the market for external SSDs.

Sony's CEO broke his silence on the hacking that disrupted Sony Pictures Entertainment last month, and said he's proud of its staff and partners for standing up to "extortionist efforts of criminals." Kazuo Hirai made the comments ahead of Sony's news conference at CES on Monday, and described the incident as "one of the most vicious and malicious cyberattacks that we've known." While the FBI has identified the perpetrators as being backed by North Korea, lively debate in the cybersecurity community is still questioning that assumption.

Facebook is acquiring speech-recognition startup Wit.ai, which has a platform that lets outside developers incorporate speech recognition into apps, home devices such as thermostats, and even robots. The not-even-two-year-old startup says that more than 6,000 developers have used its technology to build apps and devices.

Canadian bitcoin exchange Vault of Satoshi said it will shut down and focus on other business. This comes just a day after a busy European bitcoin exchange halted trading on Monday after it detected problems with its "hot wallet," Coindesk reported. Bitstamp told users not to make deposits, but said it had ample offline reserves to cover deposits made prior to Monday morning. Coindesk says that Bitstamp took over much of the U.S. dollar bitcoin exchange business when Japan-based Mt. Gox failed in February last year. Meanwhile, IDG News Service reported earlier that police in Tokyo now suspect that most of the roughly US$370 million in bitcoin that disappeared in the Mt. Gox collapse probably vanished due to fraudulent transactions. Mt. Gox blamed a bug, exploited by hackers, but Tokyo police apparently think those losses amounted to just 1 percent of the total.

The failure of Amazon.com's entry into the handset market, the Fire Phone, has apparently resulted in tumult at its Silicon Valley R&D outfit, Lab126. Departures and management changes are in "response to an organizational structure that some contend had grown 'bloated' if not 'inexplicable,' as one former high-level employee describes it," Fast Company reports.

10 things you need to know about Intel's Broadwell

Intel's big play at CES was launching its fifth-generation "Broadwell-U" Core processor for desktops and notebooks. Here's a quick study guide to bring you up to speed on the chip, and when -- and whether -- you should put the products using it on your shopping list.

Entrepreneur Elon Musk already has plenty of environmentalist cred as the chief of electric-car company Tesla. On Tuesday his less earthbound SpaceX venture was planning to take recycling to the next level, by launching a rocket and then landing its first stage on a barge, the New York Times reported. Unfortunately, the launch was scrubbed about 90 seconds before liftoff due to technical problems, but the company will try again at 5:09 a.m. Friday, said NBC News. If SpaceX can succeed in saving, and reusing, that 14-story-tall component, it does more than keeps the oceans clean of trash: it changes the economics of rocket launches.

Catch the highlights of Samsung's CES keynote boiled down into a two-minute video.

There's no shortage of discussion about how mobile apps are creating a million walled gardens where once information flowed across the open web. But now, Conor Dougherty of the New York Times writes, technologists are "teaching apps to talk to one another."