IT department becomes the cloud broker and relaxes about security 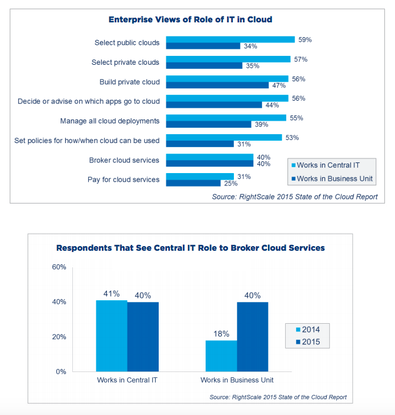 Fewer central IT execs see security as a significant challenge to moving workloads to the cloud but that’s come with more business managers agreeing IT should be the cloud middleman.

The days of business units sneaking around the IT department to buy cloud services may be coming to an end, with growing consensus that IT should be shepherding business units in their move toward the cloud.

RightScale’s report included responses from 930 technical executives, managers, practitioners from across the globe, with a third coming from organisations with greater than 1000 employees and the remainder from SMBs with fewer than 1000 staff.

While the business attitudes may have moved closer to central IT on cloud brokering, central IT has become more relaxed about cloud computing. Last year 47 percent of respondents from central IT saw cloud security as a significant challenge, which fell to 41 percent in 2015. That coincided with jump among central IT respondents who reported public cloud as a top priority, rising 10 percentage points to 28 percent.

Despite wide agreement that central IT should play a brokering role, there’s still a tussle over ultimate control. For example, 59 percent from central IT believe they should select the public cloud provider, while 34 percent from business believe central IT should — a split that was borne out on other matters, including who gets to select private clouds, who manages cloud deployments and policies, and how and when a cloud service is used.

RightScale also broke down top concerns among companies at different stages of maturity in the cloud. The top challenge for the most mature or “cloud focussed” was security at 19 percent, closely followed by compliance at 18 percent. For mid-stage cloud users, building a private cloud was the top challenge at 32 percent, while for beginners, a lack of resources and expertise at 35 percent was the top challenge.

And while cloud security give fewer IT execs heart palpitations these days, security remains the single biggest concern overall with 28 percent of respondents registering it as a significant challenge. However, where as last year only 17 percent cited skills and resources as a significant worry, this year 27 percent said this was a significant concern, making a lack of skills as big a concern as security.